Noise Pollution and its effect - Part 1

Working in a start-up and like Yuktix which is into IOT (Internet of Things) for Environmental monitoring and Agriculture means a lot of field trips across the city to the remote places in Bangalore. Also now days, every job is stress full and not because of the work pressure but because of many other factors like traffic, pollution(air, sound). And when you cross some of the most busiest junction of the city like silk board and some one just behind you honk with out any reason, just like he is on a F1 race track, you feel getting out of your car or scooter and say ******* ? Wait !!!! what is it, feeling too much annoyed on some one honking behind you is a  symptom of you being in stress and tension.

Bangalore - IT capital
Bangalore is IT capital of the nation and the top most city giving birth to new start-ups and  rise to number of job opportunities in the cities and thus leads to migration of people from different part of country to Bangalore. As per daily newspaper The Hindu, there are 55 lakhs vehicles plying on the roads of Bangalore with a average speed of 15km/hour which as per observation is going to decrease further to 9-10km/hour.

With these much vehicles on the road and even 10% of them or 1% of them honking, one can assume amount of noise pollution, but we can never say as we don't have any real time data. Although Government of Karnataka via KSPCPB(Karnataka state pollution control board) has installed 5 continuous monitoring station at BTM layout, Marathalli, Nisarga Bhavan, Parisara Bhavan and Pinia.  Below is the snapshot of the noise pollution for the year 2013-14.

Sources
There are multiple sources of noise pollution and major among them are
Adverse effect of Noise pollution
Frankly, the biggest and the strongest effect of noise pollution, i see is stress, aggression and hypertension. Even sometime, ,i feel the effect of the same. In this busy life of IT and digitization, when everyone is too much busy, there is always a stress factors added to it. With noise pollution it always increase. Below are some of the adverse effects of noise pollution.  Noise levels above 55dB are sufficient to cause annoyance and aggressive behavior. Also sound level above 75 dB can lead to increased stress levels, increased heart rates and potential hearing loss.

Here is link to small article on the ill effect of noise pollution on the health of Traffic cops in Bangalore. Most of the cops suffer from tinnitus. Also as per this article, Bangalore stand at second place with 1906 suicide cases in 2014 and hypertension, stress might be the reason for the same. So what is the need of talking all about it here. Point to be taken from here is, Noise pollution is one of the stress inducing factor in daily life of people living in metro cities who already have lot of stress in their life.

Why real time monitoring?
Suppose you are moving through some of the busiest junction in the city, being inside the car, you don't care if anyone or even you are honking or not. Or even a administrative officer in Karnataka government get real time update on his mobile if any of the units find more than allowed, then atleast traffic cops can take some preventive measures. And the biggest things is awareness among the people. Data which is not public is of no use. These days with social media, its lot easier to distribute data and make people aware. Once people are aware of the levels of noise and its ill effetcs, they themselves will stop honking. 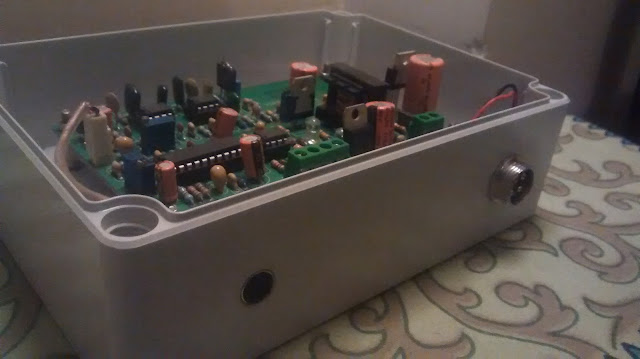 These sensor when  plugged with Yuktix IoT (Internet of thing) platform will turn into real time noise pollution monitoring station capable of running on both solar power and AC power. Data from these units would be published on the Yuktix Cloud which would be open to public as well as on Android application.

We are trying to partner with some NGO's and companies working towards social cause in installing these real time ambient noise monitoring stations at some of the busiest junction across the city. Very soon we will be publishing a article with more data about our Ambient noise sensor, its sensitivity and comparison with other available DIY sensor.

Smart Sensing for Greenhouse  Sensing play a important role in Farming, be it open field or closed environment like Greenhouse or Poly-house. You can read more about application of smart sensing in Agriculture in these blogs ( Part 1 and Part 2 ) and a whitepaper which we have published. S mart Sensing is application of sensors to measure the environmental variables like weather, soil, water which impact the activities during pre and post harvest in order to improve the productivity, production and reduce loss. While in open field agriculture, you cannot control the weather but only can take preventive measure, in a closed environment agriculture like Greenhouse, Poly-house you control the environment and make is suitable for the growth of plant like altering the temperature, humidity, soil moisture, CO2 content, Lux. Previously we have published couple of articles regarding how  What can be sensed in a Greenhouse i.e. environmental variables which impact the plant g
Read more